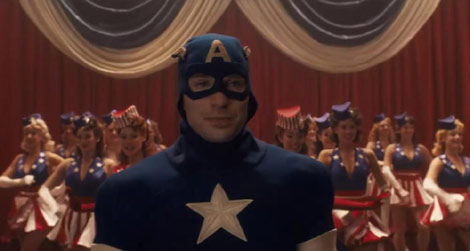 Girls (singing): Who waked the giant that napped in America? We know it’s no one but Captain America.

Girls (singing): Who’ll finish what they began? Who’ll kick the Krauts to Japan? The star-spangled man with a plan!

Steven: How many of you are ready to help me sock old Adolf on the jaw? Okay. I need a volunteer.

Soldiers: I already volunteered! How do you think I got here? Bring back the girls!

Steven: I think they only know the one song, but I’ll see what I can do.

Soldiers: You do that, sweetheart. Nice boots, Tinker Bell!

Steven: Come on, guys, we’re all on the same team here.

Soldiers: Hey, Captain! Sign this! Bring back the girls!

Steven: What are you doing here?

Agent Carter: Officially, I’m not here at all. That was quite a performance.

Steven: Yeah. I had to improvise a little bit. The crowds I’m used to are usually more... twelve.

Steven: Bond sales take a 10% bump in every state I visit.

Agent Carter: Is that Senator Brandt I hear?

Steven: At least he’s got me doing this. Phillips would have had me stuck in a lab.

Agent Carter: And these are your only two options? A lab rat or a dancing monkey? You were meant for more than this, you know. What? Steven: You know, for the longest time, I dreamed about coming overseas and being on the front lines, serving my country. I finally got everything I wanted and I’m wearing tights. They look like they’ve been through hell.

Agent Carter: These men more than most. Schmidt sent out a force to Azzano. Two hundred men went up against him, and less than 50 returned. Your audience contained what was left of the 107th. The rest were killed or captured.

Colonel Phillips: Well, if it isn’t the Star-Spangled Man With A Plan. What’s your plan today?

Colonel Phillips: You don’t get to give me orders, son.

Steven: I just need one name, Sergeant James Barnes from the 107th.

Colonel Phillips: You and I are gonna have a conversation later that you won’t enjoy.

Colonel Phillips: I can spell. I have signed more of these condolence letters today than I would care to count. But the name does sound familiar. I’m sorry.

Steven: What about the others? Are you planning a rescue mission?

Steven: But if you know where they are, why not at least...

Colonel Phillips: They’re 30 miles behind the lines through some of the most heavily fortified territory in Europe. We’d lose more men than we’d save. But I don’t expect you to understand that because you’re a chorus girl.

Colonel Phillips: Well, then understand it somewhere else. If I read the posters correctly, you got someplace to be in 30 minutes.

Colonel Phillips: If you have something to say, right now is the perfect time to keep it to yourself.

Agent Carter: What do you plan to do, walk to Austria?

Steven: If that’s what it takes.

Agent Carter: You heard the Colonel. Your friend is most likely dead.

Steven: You don’t know that.

Agent Carter: Even so, he’s devising a strategy. If he detects...

Steven: By the time he’s done that, it could be too late.

Steven: You told me you thought I was meant for more than this. Did you mean that?

Steven: Then you got to let me go.

Agent Carter: I can do more than that.

Agent Carter: The Hydra camp is in Krausberg, tucked between these two mountain ranges. It’s a factory of some kind.

Stark: We should be able to drop you right on the doorstep.

Steven: Just get me as close as you can. You two are gonna be in a lot of trouble when you land.

Agent Carter: And you won’t?

Steven: Where I’m going, if anybody yells at me, I can just shoot them.

Agent Carter: They will undoubtedly shoot back.

Stark: Agent Carter? If we’re not in too much of a hurry, I thought we could stop off in Lucerne for a late-night fondue.

Agent Carter: Stark is the best civilian pilot I’ve ever seen. He’s mad enough to brave this airspace. We’re lucky to have him.

Agent Carter: This is your transponder. Activate it when you’re ready and the signal will lead us straight to you.

Steven: Are you sure this thing works?

Stark: It’s been tested more than you, pal.

Agent Carter: Get back here! We’re taking you all the way in!

Steven: As soon as I’m clear, you turn this thing around and get the hell out of here!

Agent Carter: You can’t give me orders!

Steven: The hell I can’t! I’m a Captain!