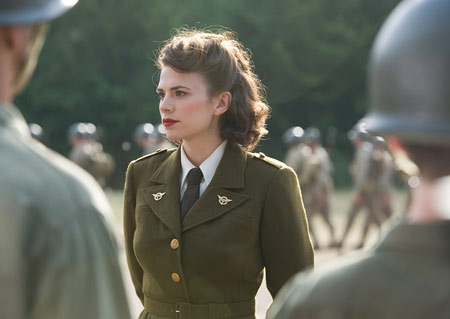 Agent Carter: Recruits, attention! Gentlemen, I am Agent Carter. I supervise all operations for this division.

Hodge: What’s with the accent, Queen Victoria? I thought I was signing up for the US Army.

Hodge: We gonna wrassle? ’Cause I got a few moves I know you’ll like.

Colonel Phillips: I can see that you are breaking in the candidates. That’s good! Get your ass up out of that dirt and stand in that line at attention till somebody comes tells you what to do.

Colonel Phillips: General Patton has said that wars are fought with weapons, but they are won by men. We are going to win this war because we have the best men. And because they are going to get better. Much better. The Strategic Scientific Reserve is an Allied effort made up of the best minds in the free world. Our goal is to create the best army in history. But every army starts with one man.

Officer: Rogers! Get off of there! 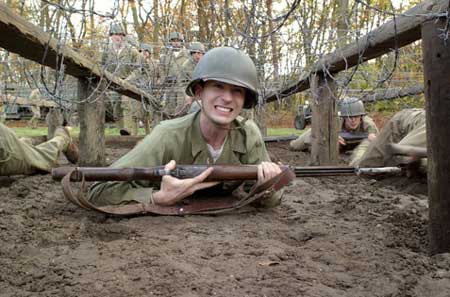 Colonel Phillips: At the end of this week, we will choose that man. He will be the first in a new breed of super-soldier.

Officer: Rogers! Get that rifle out of the mud!

Colonel Phillips: And they will personally escort Adolf Hitler to the gates of hell.

Agent Carter: Faster, ladies! Come on. My grandmother has more life in her, God rest her soul. Move it!

Colonel Phillips: You’re not really thinking about picking Rogers, are you?

Dr Erskine: I’m more than just thinking about it. He is the clear choice.

Colonel Phillips: When you brought a 90-pound asthmatic onto my army base, I let it slide. I thought, “What the hell.” Maybe he’d be useful to you, like a gerbil. I never thought you’d pick him.

Colonel Phillips: You stick a needle in that kid’s arm, it’s gonna go right through him.

Colonel Phillips: Look at that. He’s making me cry.

Dr Erskine: I am looking for qualities beyond the physical.

Colonel Phillips: Do you know how long it took to set up this project? All the groveling I had to do in front of Senator What’s-His-Name’s committees?

Dr Erskine: Brandt. Yes, I know. I am well aware of your efforts.

Colonel Phillips: Then throw me a bone. Hodge passed every test we gave him. He’s big, he’s fast. He obeys orders. He’s a soldier.

Dr Erskine: He is a bully.

Steven: Get away! Get back!

Officer: It was a dummy grenade. All clear. Back in formation.

Steven: Is this a test?

Dr Erskine: May I?

Steven: I got the jitters, I guess.

Dr Erskine: Me, too.

Steven: Can I ask you a question?

Dr Erskine: I suppose that is the only question that matters. This is from Augsburg. My city. So many people forget that the first country the Nazis invaded was their own. You know, after the last war, my people struggled. They felt weak. They felt small. And then Hitler comes along with the marching and the big show and the flags. And he hears of me. My work. And he finds me. And he says, “You.” He says, “You will make us strong.” Well, I am not interested. So he sends the head of Hydra, his research division. A brilliant scientist by the name of Johann Schmidt. Now, Schmidt is a member of the inner circle. And he is ambitious. He and Hitler share a passion for occult power and Teutonic myth. Hitler uses his fantasies to inspire his followers. But for Schmidt, it is not fantasy. For him, it is real. He has become convinced that there is a great power hidden in the earth, left here by the gods, waiting to be seized by a superior man. So when he hears about my formula and what it can do, he cannot resist. Schmidt must become that superior man.

Steven: Did it make him stronger?

Dr Erskine: Yes. But there were other effects. The serum was not ready. But more important, the man. The serum amplifies everything that is inside, so good becomes great. Bad becomes worse. This is why you were chosen. Because a strong man who has known power all his life may lose respect for that power, but a weak man knows the value of strength. And knows compassion.

Steven: Thanks. I think.

Dr Erskine: Whatever happens tomorrow, you must promise me one thing. That you will stay who you are. Not a perfect soldier, but a good man.

Steven: To the little guys.

Dr Erskine: No, no. Wait, wait. What I am doing? No, you have procedure tomorrow. No fluids.

Steven: All right. We’ll drink it after.

Dr Erskine: No, I don’t have procedure tomorrow. Drink it after? I drink it now.