Steven: I know this neighborhood. I got beat up in that alley. And that parking lot. And behind that diner.

Agent Carter: Did you have something against running away?

Steven: You start running, they’ll never let you stop. You stand up, you push back. They can’t say no forever, right?

Agent Carter: I know a little of what that’s like, to have every door shut in your face.

Steven: I guess I just don’t know why you’d want to join the Army if you were a beautiful dame. Or a... a beautiful woman. An agent. Not a dame. You are beautiful, but...

Agent Carter: You have no idea how to talk to a woman, do you?

Steven: I think this is the longest conversation I’ve had with one. Women aren’t exactly lining up to dance with a guy they might step on.

Agent Carter: You must have danced.

Steven: Well, asking a woman to dance always seemed so terrifying. And the past few years, it just didn’t seem to matter that much. I figured I’d wait.

Agent Carter: For what?

Steven: What are we doing here?

Agent Carter: Yes, but I always carry an umbrella.

Dr Erskine: Please, not now. Are you ready? Good. Take off your shirt, your tie, and your hat.

Colonel Phillips: Senator Brandt, glad you could make it.

Senator Brandt: Why exactly am I in Brooklyn?

Colonel Phillips: We needed access to the city’s power grid. Of course, if you’d given me the generators I requisitioned...

Senator Brandt: A lot of people are asking for funds, Colonel. This is...

Fred Clemson: Fred Clemson, State Department. If this project of yours comes through, we’d like to see it used for something other than headlines.

Senator Brandt: Jesus. Somebody get that kid a sandwich.

Steven: It’s a little big. You save me any of that schnapps?

Dr Erskine: Not as much as I should have. Sorry. Next time. Mr Stark, how are your levels?

Stark: We may dim half the lights in Brooklyn, but we are ready as we’ll ever be.

Dr Erskine: Agent Carter? Don’t you think you would be more comfortable in the booth?

Dr Erskine: Good. Do you hear me? Is this on? Ladies and gentlemen, today we take not another step towards annihilation, but the first step on the path to peace. We begin with a series of microinjections into the subject’s major muscle groups. The serum infusion will cause immediate cellular change. And then, to stimulate growth, the subject will be saturated with Vita-Rays. 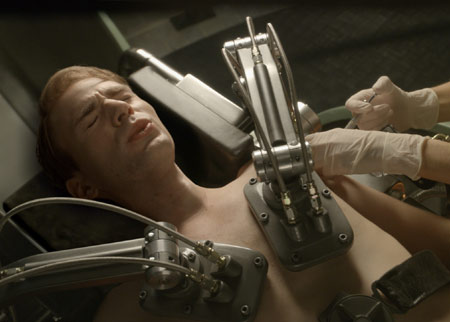 Steven: That wasn’t so bad.

Dr Erskine: That was penicillin. Serum infusion beginning in five, four, three, two, one. Now, Mr. Stark. Steven? Can you hear me?

Steven: It’s probably too late to go to the bathroom, right?

Dr Erskine: We will proceed.

Colonel Phillips: The son of a bitch did it.

Steven: I did it.

Dr Erskine: Yeah, yeah. I think we did it.

Stark: You actually did it. 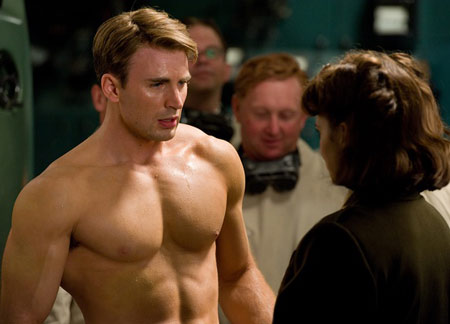 Agent Carter: How do you feel?

Colonel Phillips: How do you like Brooklyn now, Senator?

Senator Brandt: I can think of some folks in Berlin who are about to get very nervous. Congratulations, Doctor.