Katie: My eyes are closed.

Katie: My eyes are closed.

David: I swear to God, if I'm going to be a captain of industry, we might as well enjoy the perks. You're looking.

David: Okay. Do you want to count it down?

Katie: You do it.

David: You like it up there or you want to come down?

Katie: I want to come down.

David: Come on down. 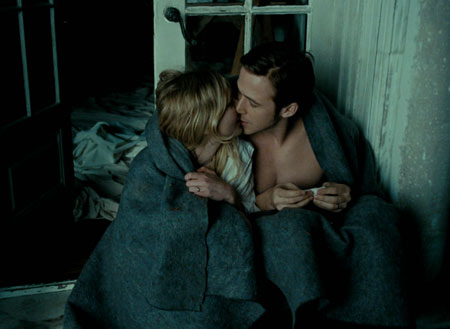 Katie: Hi. It's gonna be so beautiful here. Do you ever think about having kids? Come on. Don't you want a little David running around the house? Pulling at your toes in the morning? Smushing food in your hair? Are you saying no?

David: Can't we just talk more about the apartment and, you know, whether this is going to be a dining room or a living room? Or... you know? (lighter flicks)

Katie: Are you saying "not now" about kids or not ever?

David: Not ever. (groans)

Katie: David...is there something wrong with you?

David: Yeah. There is something wrong with me.

David: (murmuring) Are you saying no? (murmuring continues)

Katie: Are you okay?

Lawyer: David, did you ever have any kind of psychiatric treatment?

David: Well, after my mother died, I was sent to psychiatrists. A lot of them, actually. I didn't find them very helpful.

Lawyer: Was there anyone in your life with whom you did talk openly about your past?

Deborah: David, you cocksucker! Get over here and give me a hug. How are you?

David: Look at her. I swear to God, I had no idea that people like her even existed. She's perfect.

David’s friend: (laughs) What do you mean by perfect?

David: I mean there's nothing that I do that she doesn't like.

Katie: It must be so exciting, having your first book published? You know, I was thinking of taking some classes. Maybe premed.

Deborah: Well, that's him. It's like...like when he lost his mother.

Katie: When did she pass away?

Deborah: Pass away? She jumped off the roof, cracked her skull open like a walnut on the driveway. David saw the whole thing. He hid under a table for a week. When he came out, it was... it was like he never had one.

Deborah: A mother. And... and that was it. Excuse me, Katie. Smile.

David: You're the only person I know that can say "sweet" like you're cursing.

Deborah: I did... sweet is a great thing. I wish I was sweet.

David: Yeah, I wish you were sweet too.

David: What'd you say to her?

Deborah: Nothing. I didn't say anything to her. We were just talking. I just met her.

David: I've missed you too.

Deborah: You surprised me a little. You're married to a nice blonde shiksa? (laughing) Well, I wouldn't put it like that. You're working for...you're working for your dad, David? Which you said you'd never do. When's the baby shower?

David: Come on. You know, it's still me.

Deborah: Does that girl know how fucked up you are? No, we're gonna...we're gonna straighten you out, David. We are. I know a great therapist and you're gonna love her because...because she doeshouse calls.