Man: Stand down. Sorry, sir. Mr. Stanton doesn't see anyone without an appointment.

Joseph Holt: Perhaps I can beof some assistance.

Frederick Aiken: If you can arrange an appointment for me with the secretary, you can.

Joseph Holt: Unfortunately he's quite busy right now, but perhaps you'd care to have a word with me instead. Please.

Frederick Aiken: My client is unwell.

Joseph Holt: So I hear. Touch of the woman's curse. I'm sure she'll be well enough to continue her trial in a few days.

Frederick Aiken: She's been in solitary confinement for over a month. She hasn't eaten in over a week.

Frederick Aiken: Unless she has a proper meal and some fresh air, I can't guarantee she'll be it for trial. 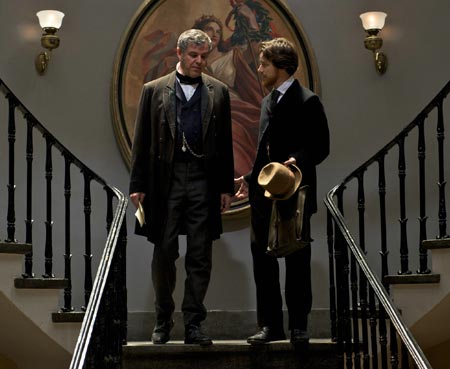 Joseph Holt: One of the conspirators refuses to be guarded by a Negro, and the other insists on only eating his mother's cooking. We can't accommodate every whim.

Frederick Aiken: Come now. I am merely asking for you to stop treating her like a savage.

Joseph Holt: How dare you accuse us of savagery? Have you forgotten how our own were treated by the rebels?

Frederick Aiken: Of course not.

Frederick Aiken: But Mary Surratt is in serious decline. If this treatment of her continues, she will not be sound of mind. And I trust that is something the government wishes to avoid.

Joseph Holt: I may have a way to serve all interests. I'll deny ever telling you this. Understood?

Mary Surratt: Feel that sun. Do I have you to thank for this? Well, thank you.

Frederick Aiken: Well, if I could just get you to start eating.

Frederick Aiken: Mary, there's something I need to ask you.

Mary Surratt: I've never seen you at a loss for words, young man.

Frederick Aiken: Do you know where your son is hiding?

Mary Surratt: Johnny? Of course not.

Frederick Aiken: Government believes you do.

Mary Surratt: What do you believe?

Frederick Aiken: I believe you know more than you're willing to tell me.

Mary Surratt: Uh, have you ever cared for something greater than yourself?

Frederick Aiken: I've spent these last four years fighting for something greater than myself, so don't...

Mary Surratt: Then we are the same.

Frederick Aiken: Mary, you have to tell us where your son is.

Mary Surratt: Us? I have to tell "us"? Whose side are you on?

Mary Surratt: By suggesting I trade my son for myself? You're trying to save you, Mr. Aiken. I wish I could give you what you need. I truly do. But if you want out, you'll have to find another way. I'm gonna take a walk. It's so nice out. Do you care to walk with me?

Nicholas Baker: So we're stuck in these shallow trenches. We're surrounded on all sides. Nobody knows what to do. Nobody knows what to say. We're frozen, completely petrified. And then from somewhere up on the hill, we hear this loud booming Southern voice. It's the rebel general. He yells, "Y'all boys better say your prayers, because there are 400 of us and only 100 of you."

Frederick Aiken: You can stop right there, Baker.

Nicholas Baker: And so then this madman, he stands up, and he yells back to him, and he says... he says, "Hundred? Heck, we've got less than that. But we don't surrender, so come and get us." And with that, he pulls down his pants and bares his arse. 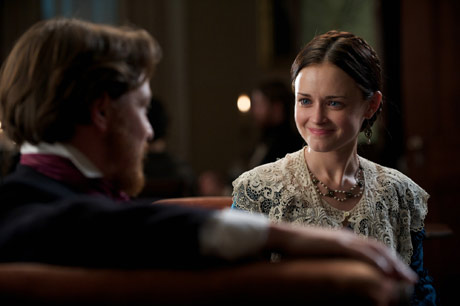 Sarah: It doesn't seem as though Fred ever intends to surrender.

Woman 1: Is it true Mrs. Surratt is a Catholic, wears black from head to toe?

Woman 2: I hear she spits in the faces of every Union soldier she encounters.

Woman 1: Apparently she wears a necklace made from the bone of a Union soldier.

Nicholas Baker: So, okay, who would like to dance?

Sarah: Dance? It's more like a wake. I suppose I should have dressed more like Mrs. Surratt.

William: Fred, what are you doing?

Frederick Aiken: I'm enduring the pain of having to listen to Baker.

William: You know what I mean. If she's found guilty, they'll say you weren't up to the task. And God forbid you prevail. They'll think you just as much a traitor as she.

Frederick Aiken: Baker, how 'bout something a little happier?

Sarah: William's right, you know. Either outcome, you cannot prevail.

Sarah: What is it about Mary Surratt you find so compelling? These are criminal, despicable people, Fred. They're... they're the same sort of people you risked your life fighting against, and she helped kill your commander in chief.

Frederick Aiken: I don't know what she's guilty of.

Sarah: May I ask you one more thing?

Frederick Aiken: What is it, Sarah?

Sarah: Does the captain remember how to dance?

Reverdy Johnson: Few people will forget what side you fought on. Trust me. It can be lonely.

Reverdy Johnson: This habit of quoting me back to me could become most irritating. You have your mother's convictions and your father's annoying habits.

Frederick Aiken: Well, "Maw Surratt is entitled to a defense, Freddie, so I shall defend her."

Reverdy Johnson: If they want John Surratt, then you should serve him up on a platter. I... I don't mean, uh, physically. I mean in spirit. You have to prove to the Commission that he is responsible, not her.