Greg’s mother: Hey, Rodrick, could you come here, please? What happened to the lock?

Rodrick: I don't know what you are talking about?

Greg’s mother: There was a lock on this door.

Rodrick: I don't think so.

Greg’s mother: Rodrick, I have lived in this house for ten years and I've locked that door ten thousands times, because sometimes it's my only moment for privacy of the day. And there was a lock on the door.

Rodrick: There wasn't. Trust me. Greg has walked in on me like a million times, and if there was a lock, I would use it. In fact, maybe you should put one on.

Greg’s mother: So that's your story? There was never a lock and you have no idea what I'm talking about?

Greg: It was Rodrick. He held a party. Someone ruined the door, so we had to change it.

Greg: No, Mom, wait, I was exaggerating a little bit. It wasn't a party. It was a band rehearsal, for the talent show. That’s all it was.

Greg’s mother: We said nobody could come over. He knew the rules.

Greg: But Mom, if you punish him, Rodrick can know I told on him. We really had a good time this weekend but if you do this, Rodrick and I will never, ever be friends again. The idea that one day my kids won't get to know Uncle Rodrick? Or any family holidays.

Greg’s mother: You two really have been getting better along this weekend, haven't you?

Greg: Yeah, we really have.

Greg’s mother: Ok, if, if I let this slide and be our little secret, for the sake of family and for your relationship with your brother. Do you swear to be on your best behavior and to get better along?

Rodrick: You didn't back off?

Rodrick: You know...you may not be half dumb as I thought you were.

Greg: I couldn't believe it. Rodrick was actually trying to be nice to me. Wow. You're a Mum Bucks millionaire. Where did you get this?

Rodrick: Thrift Shops. There is enough in here to last me until I'm 30. It is now time, little bro, that you understand the secrets to an easy life. Rule No. One: Don't be good at something you don't want to do. 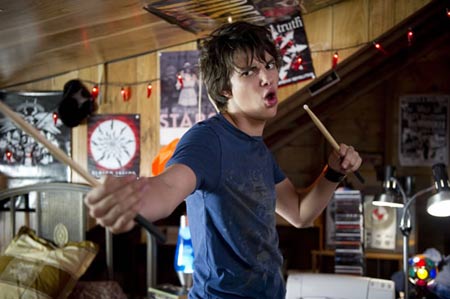 Greg: Hey, I took a math test today, you know, pretty sure, I've flunked it.

Rodrick: Rule No. Three: Never do something when someone else can do it for you.

Rodrick: “A Hundred Year Ago”. I remember that assignment. Why write a new one when there is a perfect little paper already written by your brother?

Greg: The thing was, Rodrick had managed to get my Dad to do all of his homework for the past five years.

Rodrick: Which one is the space part again?

Greg: I would never actually hand in a paper Rodrick wrote. But my Dad? That is a different story. So that's just the three things Rodrick has taught me. He has a lot of cool tips.

Rowley: I'm not sure Rodrick’s tips are really that cool.

Greg: OK. So the invisible Chirag joke is still going. The whole school is on it, but it looks like Chirag discovered our weakness.

Rowley: I wonder if I can do this.

Chirag: What is this? A Corn Dog. Rowley's all-time favorite lunch delicacy. If you say you can see me, Rowley, it is all yours. Hmm. Smell the fragrance of butter.

Kids: Do not, Rowley. Resist it!

Greg: Hey, everyone. Look, there is a floating Corn Dog. I don't want to get ahead of myself for anything, but I think I may have class crown in the back for dreaming this one up.