Mark: I'm not a mind reader.

Matt: Is this a bad time?

Kai: Uh, no, no, we're just fighting. Uh, come on in. You want coffee? You want something to drink?

Mark: Fighting about something stupid.

Kai: It's not stupid.

Mark: It is stupid.

Kai: He wants us to throw parties and have people over, which we do of course, but who winds up doing the work? Me, I do.

Mark: You don't have to do anything. That's the whole point.

Mark: It doesn't have to be work. You don't have to clean and buy an outfit.

Kai: I'm supposed to be disgusting?

Mark: And think up a goddamn theme cocktail for every party. We could just invite people over to hang out and drink whatever we have. Let's talk about it later.

Kai: Oh, shit, Matt, is everything okay? Is there any news?

Matt: In fact, there is. I'll tell you about it in a minute. Who is he? Does she love him? Who is he?

Matt: I'm sorry to put you in that position, but I'm not really the one who put you there, am I? I'd like to know who the guy is that my wife was seeing.

Matt: You have very keen powers of observation.

Kai: Well, OK, You know what? I think we should talk about this later. I think maybe you just need to cool it.

Matt: Is it Troy? That fucking Neanderthal.

Mark: You don't know him.

Kai: Mark, don't you even. Shame on you. You're supposed to be her friend.

Mark: Well, guess what. I'm Matt's friend too, okay? And this is a unique and dramatic situation, and I would wanna know.

Kai: Yeah, well, don't betray her when she's not even here to defend herself. Matt, look, you might not be able to hear this right now but it's not her fault. Your marriage was not... Just... She was lonely.

Matt: She is gonna talk to me in clichés about women. Nothing is ever a woman's fault. Was it still going on when she had the accident?

Mark: But I stay out of it. Any time Kai would bring it up, I would walk away.

Matt: You what? Probablyegged her on. Add a little drama in your life without any actual risk. Who do you think you're protecting, Kai? She doesn't need your protection. It's over. She's gonna die.

Matt: It's true. I was gonna tell you yesterday. She's never gonna wake up. You hear me? Do you understand what I'm saying? She's gone. We're pulling the plug. You were putting lipstick on a corpse.

Matt: Does she love him?

Kai: How can you ask about him when she's gonna die? Who cares? Yes, she loves him. Loved him, whatever. She was crazy about him. She was gonna... she was gonna ask you for a divorce. 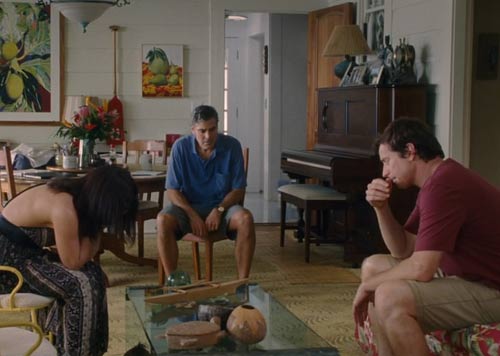 Matt: You still haven't told me who he is. I guess it doesn't matter.